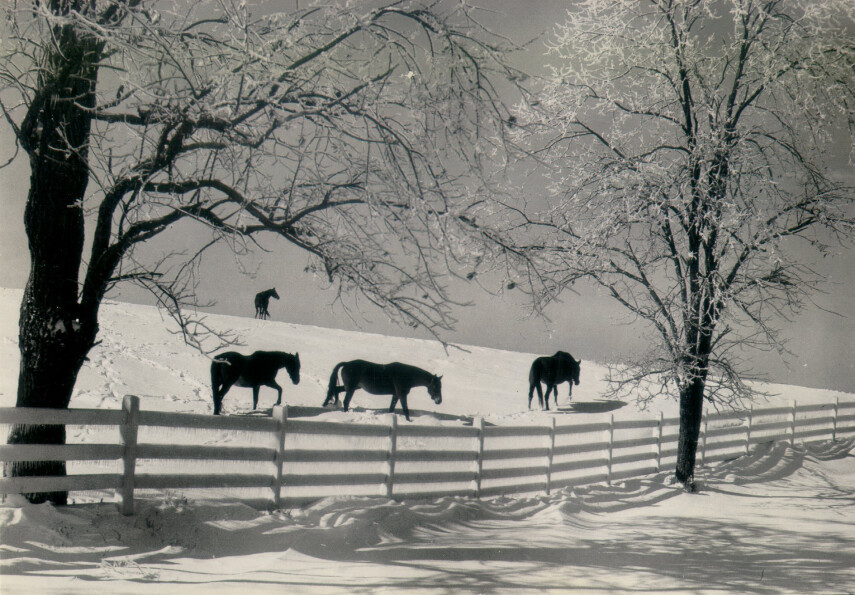 Winter Depression is a real experience; it effects some more than others. Perhaps the greatest contributor is a constant, never-ending, day-after-day grey sky. There is something about the constant hiding of the sun that takes a toll on our minds, attitudes, perhaps even our souls. In contrast, a fresh snow is an unmatched beauty. That white blanket is a brilliant solace in the midst of the darkest of winters. Yet, it is quite rare to have that powdery covering without the same grey sky that provokes depression.

Life is no different than the winter season. Trials come upon us all, sometimes in an unrelenting way. These trials often stunt our lives like the unyielding grey covering the sun. However, the Christian has a solace in the midst of testing. The solace is the presence, protection, and purpose of our God. As a result, God provides the Christian with the greatest of joy in the midst of the very thing that often brings so much sorrow. In the same way we rejoice when there is a snow—even though the grey clouds remain—the Christian rejoices in the Lord though the trial is still before him.

Here are some passages to that end:

James 1:2   Count it all joy, my brothers, when you meet trials of various kinds, 3 for you know that the testing of your faith produces steadfastness. 4 And let steadfastness have its full effect, that you may be perfect and complete, lacking in nothing.

Rom. 5:1   Therefore, since we have been justified by faith, we have peace with God through our Lord Jesus Christ. 2 Through him we have also obtained access by faith into this grace in which we stand, and we rejoice in hope of the glory of God. 3 Not only that, but we rejoice in our sufferings, knowing that suffering produces endurance, 4 and endurance produces character, and character produces hope, 5 and hope does not put us to shame, because God’s love has been poured into our hearts through the Holy Spirit who has been given to us.

A Christian's Perspective on Elections

Well, I’ve been asked repeatedly about the recent elections, both in November and last night in Georgia. How do you feel about the direction our country is going to be taking? Do you have any concerns about religious freedoms being restricted in the future? So I thought I’ll offer to you my perspective.

I will begin my 50th year in ministry this spring, as in March 1972 I took my first steps in ministry while still working on my undergraduate degree in theology and in that period of time I’ve witnessed Richard Nixon resigning, I’ve experienced double digit inflation and double digit interest rates during the Jimmy Carter administration. I personally met and worked with Ronald Reagan and knew George H. W. Bush when he was V.P. and witnessed the election of Clinton, Bush, Obama, and Trump; so I’ve lived through a lot of changes during the past five decades and from a fifty year perspective, here are my thoughts.

I’m grateful to have been born an American, in a republic that was established on Judeo-Christian principles. It has been a great blessing to live here and to have my family enjoy the many benefits that come from living in America.

But the day I was born again in Christ my citizenship was transferred to heaven as the apostle Paul made clear to the church at Philippi (Philippians 3:20) and while I have taught God’s word in Central America, Africa, India and other countries I’m thankful the Lord has called me to primarily teach His word to Americans; who are just as lost in their sin and going into a Christless eternity as a result of their rejection of the Lord’s provision for redemption in Christ’s atoning death at Calvary; just as much as anyone else.

So while the landscape of the country where I live may change from election to election, no ruler and no government has any impact on who I am or what I am called to do. Now the government can increase its hostility against the gospel as we saw in the first two centuries of the early church and have more recently seen in Russia, China, and other places.  And governments can impact a nation’s prosperity, the safety of their citizens, they can even take people’s lives as we saw in 1973 as I clearly remember when Roe v Wade became a legal reality in a land that is supposed to protect the most vulnerable among us.

World powers come and go as we’ve seen with the Egyptians, Assyrians, Babylonians, Persians, Greeks, Romans, Turks, Celts, Mongols, and in more recent days the Japanese, Brits, and Germans but the one consistent fact that never changed during any of those empires or worldwide dominance of those countries is our Creator was still sovereign over all His creation. He never once relinquished any aspect of His sovereign control. Through the rise and fall of each leader He continued to reign by the power of His omnipotence and as a result of His omniscience He was never surprised, nor confused, nor disillusioned as to how His purposes would be accomplished.

Nebuchadnezzar posed no threat to Him any more than Caesar or Herod or Nero or Attila the Hun or Hitler.

So from my perspective, nothing that has happened yesterday today or will happen tomorrow that will change who I am in Christ or what I have been called to do by Christ.

The landscape in which I do it may change as this spiritually darkened world often changes the way it operates, but its need for the gospel will never change and that is really our only purpose in life isn’t it? To shed the light of God’s truth in a spiritually darkened world whereby men, dying in their sin, might come to know the Author of life and praise Him for eternity for the goodness, mercy, kindness, grace that He has bestowed upon a world that deserves His righteous judgment. That’s our only purpose for being here, isn’t it? Otherwise, when we’re born again in Christ why don’t we just hold everyone under at baptism and send ’em on to glory? Our purpose on earth regardless of where we live is to take the good news of God’s redemption to those dying in their sin. It is true that new regulations, laws, rules, and whatever else, can impact various aspects of our life but they can’t alter who we are or why we’re here.

As we saw with the apostle Paul during the Roman Empire, whether he was teaching in a synagogue or shipwrecked on an island or brought before kings, councils and emperors who cast him into prison, the landscape of his life never changed the purpose for his life and that’s my perspective.

That’s why we are open on Sundays. Worshipping the Lord in spirit and truth is essential. The gospel is essential whether the world realizes it or not.

So I’m hoping, with the availability of vaccines increasing in the future, many who are high risk due morbidities will be able to join us once again as we have really missed seeing so many of our wonderful families who have been joining us by live-stream and while we are grateful for that ministry, it is not the same as coming together for fellowship and worship as the body of Christ. So I look forward to seeing many of you once again during this new year as we serve Christ together.

If you are in need of any help whatsoever, please let us know. We love each of you and are grateful for the joy of having you as a part of our family. Just give us a call at 859-219-1300.

Posted by Wayne Holcomb with

Check out this blog to stay up to date on what is happening in the Wellington family. Read about testimonies, ministry updates, and the impact of the gospel in how we live and how we love others.